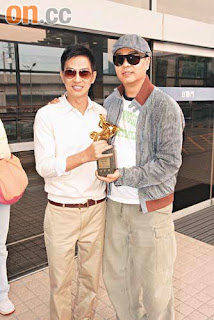 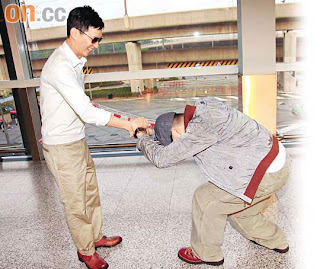 Nick Cheung and Bobby Au-Yeung once worked together in TVB's "The Legendary Four Aces". Although as movie king and TV king, but the two haven't contact each other for a while. The two met at the airport yesterday and Bobby dramatized his appearance by shouting out, "Hail to the Emperor!", and kneeled down. Then he teased Nick, "You won again? You took everything pretty much. When should I invite you to dine?" Nick replied, "This is what we call friends!" Bobby kept on teasing, "Hold on, I almost forgot about you if 'The Legendary Four Aces' didn't rebroadcast again! You were blocking the road!"

Nick said in an interview that he was very worried during the announcement of the new movie king. He watched the movies where his competitors are in and didn't dare to think of winning. He expressed winning the award is the best birthday gift and it's the most valuable thing than anything. Nick also said right now he wants to film Ang Lee's movies and work with his look-alike, Jacky Cheung.

CONGRATULATIONS to Nick for becoming 2009 movie king!!! I'm happy he received recognition in the movie industry, finally. It's so nice and refreshing to see somebody else wins the award instead of the always familiar faces... Bobby is so funny!
73 comments

Frankie and Kenix Behind the Scenes 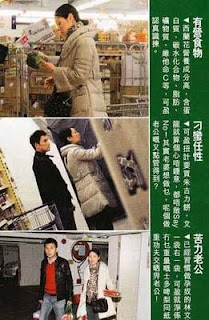 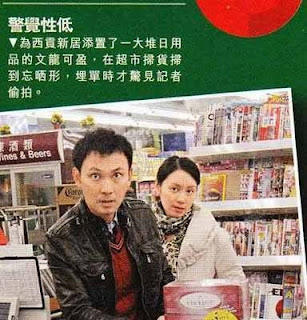 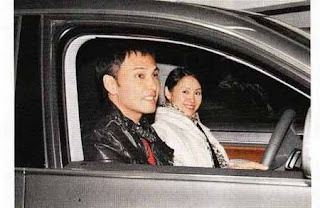 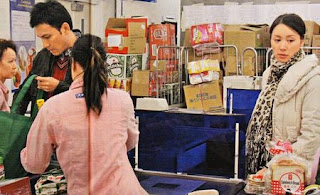 Now these are what I call real pregnant pictures. She looked too glamorous in the previous ones. Hopefully she's having healthy pregnancy. Frankie is such a loving husband. On a side note, I'm somewhat disappointed to learn that she will have a C-section. I thought natural birth is better...

Thanks to DAN for the images.
7 comments 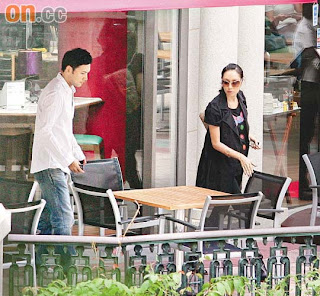 Kenix Kwok who is 5 months pregnant accepted a radio interview earlier accompanied by Frankie Lam. There were rumours that claimed she is retiring from the entertainment industry after giving birth. Frankie said "It's my wish. But as a couple we respect each other. I will respect her decision". Kenix stated that it was too early to say. Frankie also exposed that every night he would touch Kenix's tummy and speak to their Baby. He laughed and said "It is quite silly doing that."
Source: On.cc
Translation: matchbox @ http://illusive-serenity.forumotion.net/
Lol, I think Kenix seems to be too ambitious to retire right now.
I'm currently watching Born Rich both in Chinese and with English subtitles. However, I'll wait until I'm done with the series in Vietnamese then I'll do a review. I'm enjoying the series although I don't think it is living up to expectations as an anniversary series. Kenix is having a very refreshing role playing a psychotic, obsessive woman who is crossing all boundaries to make her world of fantasies happen in real life. I also enjoy watching the veterans very much. Ray, Jamie, Gallen, Anita, Joe, Nancy, etc... That's what I call true acting.
12 comments 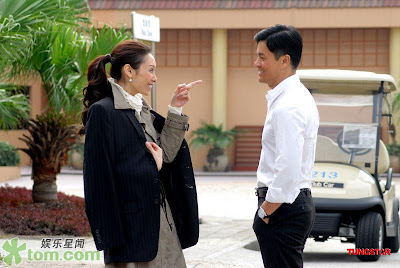 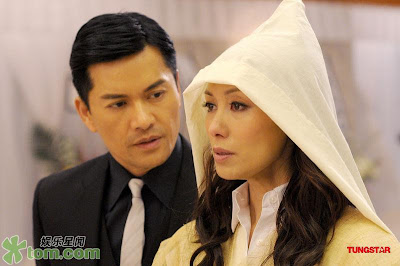 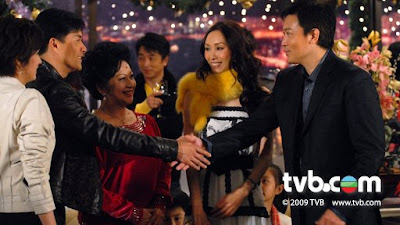 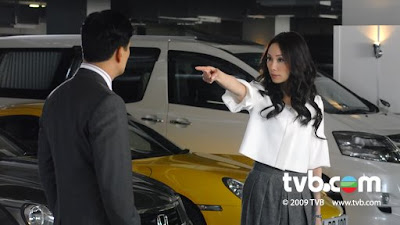 With the early passing of her mother, Ling Chi's father (Lau Siu Ming) puts all his love on his precious daughter. Ling Chi graduated from law school at the age of 23 and began her internship at a law office. During this time, she met and fell in love Cheuk Yat-yuen (Ray Lui) who is betrothed Ho Tseuk-nin (Jamie Chik). Ling Chi always thought that Yat Yuen would leave Tseuk Nin to be with her but he chose to marry his fiance at the end. Devastated, Ling Chi went to England to forget the past.

Ling Chi comes back to HK a few years later but she still cannot forget Yat Yuen. Unable to fool herself and others, she cancels the wedding plan with her fiance and reunites with Yat Yuen. Tseuk Nin discovers the affair which eventually leads to their divorce. Ling Chi offically enters the Cheuk wealthy family as Ms. Cheuk. Ling Chi's happiness turns sour when she attempts to uncover the truth behind her father's death but Sha Fu-loi (Gallen Lo) will do what it takes to silence her...

Ok, so Tung Ling Chi will die. If she’s harmed by the main villain Gallen, I do not think she will survive. Plus, there was a piece of news that happened when the filming just started saying that the characters of Ray and Jamie will reunite, so I’m pretty certain Ling Chi will not have a happy ending. Oh well…

By looking at the pictures, I could guess that Savio Tsang must play a part in the Tung family and after reading this synopsis, I bet he is Ling Chi’s fiancé. The scene that they shake hands above must be one of the early scenes when Ling Chi just comes back to HK. I cannot wait to watch their sparkles!

I translated this from a Vietnamese translation so I'm not sure how accurate this is. I find it unbelievable that Ling Chi can graduate from law school by the age of 23. Perhaps she graduated with a B.A. and then went to law school and perhaps had her summer internships.

Thanks to Miki @ DAN for the translation.

Kenix at Born Rich's Promotion - Baby is a Girl 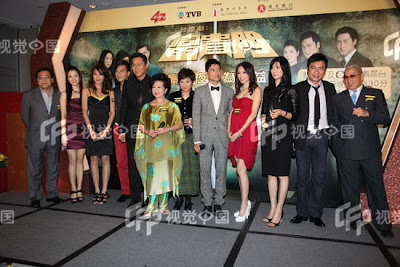 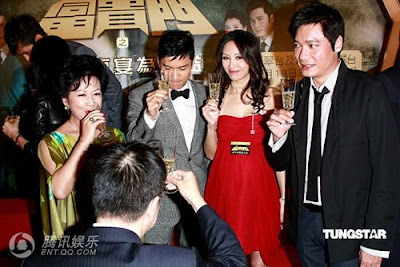 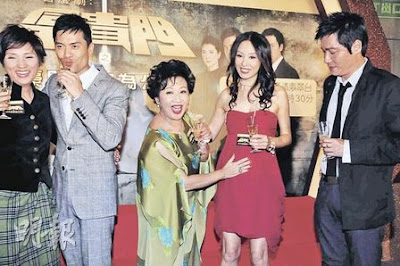 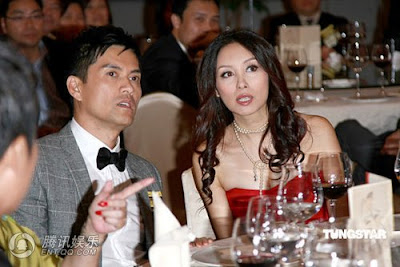 Kenix Kwok is having a girl by Caesarean Section next February

Kenix Kwok is 5 months pregnant and the ultra sound showed that it is going to be a girl. She is having the baby delivered by Caesarean Section next February. Kenix attended TVB publicity and charity gala for "Born Rich" yesterday, wearing a 4 inches high heel shoes. Since husband Frankie is not in the cast, he was not there to look after her. When Kenix arrived at the gala, she was being spoilt by many colleagues. First one to take her hand was her senior Lau Siu Ming, followed by director Chong Wai Kin who took a chair out for her to sit down when they had a group photo taken. Ray Lui, Joe Ma and Nancy Sit all went up to her to ask how she was. Kenix said she was a bit embarrassed.

Last month when Kenix accepted an interview by MingPao, she was already 4 months pregnant, but the photo showed her looking more like 5-6 months pregnant. Last night, she wore a red dress, but it didn't show her tummy that big. It could be the angle of the picture which was taken last month.

Some cast members were worried about her wearing a 4 inches high heels, in particular, the males who kept reaching out their hands to help her. Kenix explained that she only put on her high heels since she arrived, and she was wearing a pair of flat shoes beforehand. Kenix stressed that her high heels shoes are very stable, and they are very safe. Talking about the changes that she has to make since she is pregnant, Kenix smiled "I put on 10 pounds in weight, and my bra size has gone up one cup. Otherwise, everything is normal. Sometimes I crave for certain food, like if I want to eat cheung fun, I ask Frankie to get it. " (Do you know if its a boy or girl?) The ultra sounds showed it is a girl, and her face is round with a high nose. The doctor said her brain development is very healthy."(Do you like baby girl?) I don't mind, I thank God for carrying a baby.(Wiil Frankie be there when you are in labour?) Sure, I am having a Caesarean Section in February, we have been thinking a few names to call her."

Talking about the rumor that Kenix will retire from the entertainment industry after her delivery, Kenix said "It is hard work in this industry, and it is time consuming too. I don't mind attending any functions or doing some light commercials, but it is hard to tell. You never know what will happy next." For the coming "TV Queen" award, Kenix thought Sheren Tang looks promising.

Watch out on those heels, you pregnant woman!

Posted by Michelle Saturday, October 10, 2009 at 6:39 PM
For those who are interested in this series, you can visit this link to take a glimpse at what will happen:
http://images.yule.tom.com/vw/157394-1.html#picchange.
I found this link in Frankie-Kenix's Chinese Forum.

From the pictures, everything looks glamorous - the settings, the people, the fashion, you name it. For me, of course, I only care about what will hapen to my beloved Kenix's character throughout and at the end of the series. From the pictures, Kenix and Ray are simply lovebirds. I didn't expect them to look so compatible, so matching, so ideal, so perfect. Because it seems so perfect, I'm worried that they might not end up as this picture might imply: 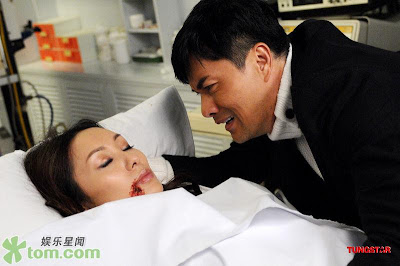 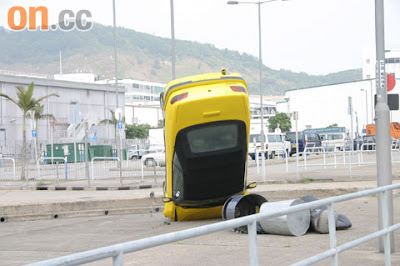 Is Kenix dead? It looks like she is to me, especially when she has that white blanket on her that must have been uncovered by Ray. Either she's seriously wounded or... dead from the car accident. I just pray that the script didn't give Kenix the latter ending. But there's a glimpse of hope: the GRAND wedding. If she will die, I don't think the director would have wasted so much time and effort filming that wedding scene on the ship. 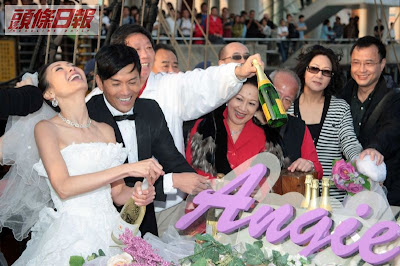 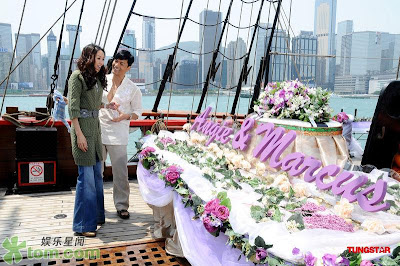 That was just my two cents. I don't mind Kenix's character dying (yeah right!) but I do dread that Ray will get back with his wife Jamie after Kenix's death. That will totally ruin the perfect love story.
On a side note, I haven't seen such a casual and relaxing scene of Kenix for a long time. 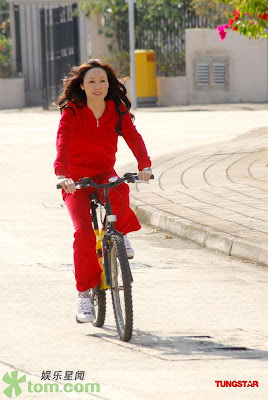 
I found this clip on Youtube & it really brings back memories. The person singing the song is different and doesn't sing as well as the version I have. This is one of my favorite songs from all the Journey to the West classic songs. The maker of the MV did a good job adding the last part of Xuanzang rescuing Sun Wu Kong. It really "completes" the sad story.
5 comments 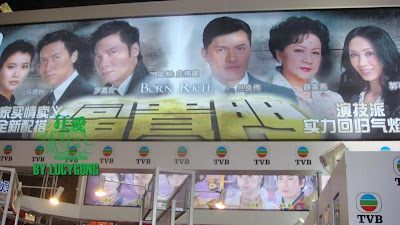 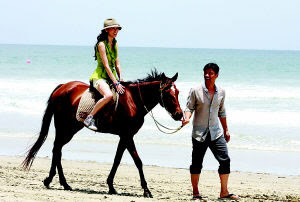 YUEN is kidnapped overseas by a group of rioters. He undergoes a dramatic personality change after the incident. YUEN's wife HO TSEUK NIN (Chik Mei Chun) has tried her best to console him but still cannot help him get over the unpleasant experience. Longing for more comfort and support, YUEN gets back with his ex-lover TUNG LING CHI (Kwok Ho Ying). NIN is heartbroken to learn about the affair and it has left the broken mirror that can't be mended. 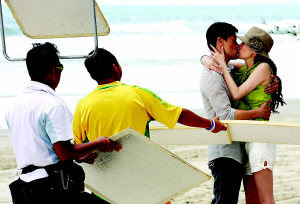 The identity of CHEUK YAT MING gives FU not only a sense of family warmth but also a sweet taste of romance. He finds himself in love with YUEN's little sister CHEUK YAT SUM (Yuen Wing Yi). SUM is attracted to FU too but thinking that they are true biological siblings, she decides to keep her love under wraps and stays with her long-term admirer KO TOK MAN (Ma Tak Chung) instead. This comes as a huge blow to FU. He is not willing to lose his love, but neither can he reveal his real identity. Caught up in the dilemma between love and money, FU finally chooses the fortune road of no return.

It is all about a tough battle for money, a devious triangle of love, and a severe challenge to ethics.

Congratulations to Kenix and Frankie! 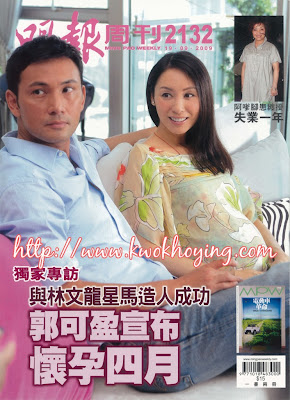 From what I read at DAN, Kenix is 4 months pregnant. I couldn't believe my eyes when I saw this picture & couldn't believe what I just read. I simply thought this day will never never come. I've been wondering what Kenix has been doing since the wrap up of Born Rich. So she was trying to have a baby. It seemed like Kenix was never ready to settle down and that she and Frankie are never going to have a kid. Hahaha... I guess nothing is certain ^___^ I cannot wait to see the miniature Kenix or miniature Frankie ^___^ I'm sure they'll be great parents. Poor Frankie... He has been waiting for so long... and finally...
It looks like Born Rich is going to be Kenix's last series for a while...
6 comments

No Justice For All ending